skip to main | skip to sidebar

Jordan wants oxen—a team of oxen. Which means two. We have known of this desire for the past several months, beginning in June or so.

At first his pleas were intermittent, somewhat serious, somewhat exploratory. We nodded in assent, agreeing with how useful they would be—at some far and distant time. But then his pleas grew more frequent and impassioned. His head would dip with the intensity of the emotion.

Where his desire came from, we have no idea. It wasn’t that he saw a team of oxen at work and wanted to do the same. None of his friends or our friends work with oxen. There was no particular book or video that he sparked his attention. Nonetheless, the idea grabbed him, and refused to let go. All Jordan knows is that he must own them, raise them, train them and use them to do farm work. He wants a form of farm power that does not pollute the environment like a tractor does. He wants to perfect an older method, one with a greater connection to the land. But there is something else too—more primal. It is as if his life, and the life he wants to lead, depends upon it.

In August, Jordan decided to make a yoke for the oxen he hoped to have. He hiked up into our land, scouting for the right kind of wood. He chose a piece of red pine—the best option he could find—and began hewing it with a hatchet—the best tool we had. Discovering that the wood was rotten in one place, he went in search of another prime piece. After achieving the rough shape of the yoke, he wanted a drawknife to finish it off. We ordered one over the web, paid for with money he had saved.

As his October birthday approached, his request was singular and unequivocal. Oxen for my birthday. That is all he wanted. I gave him a book—one about training oxen—thinking that some more information might grant the project a more realistic hue. The gift had the opposite effect. He read the book cover to cover, honing his desire with every turn of the page. He wanted two bull calves, of the same breed, born less than a month apart. Maybe Devons (the traditional American breed), or Milking Shorthorns. Jerseys would be OK too, though Devons and Jerseys are a bit harder to train than the Shorthorns: they have a higher “tractability” score. He needed to make another yoke.

It was becoming clear. This was no whim. Feeling the inevitability, I finally responded to yet another ox-chat by saying: “Call your 4H leader. Ask.” He did. A month went by.

A week ago, we received a call from another 4H member, Katie. Katie raises Milking Shorthorns. “May I speak with Jordan?” she asked. I handed over the phone and watched Jordan’s face open into a radiant beam of light. He put down the phone.

“She has two bull calves, born a week apart. She will give them to me when the weather warms a bit, and she’ll tell me more at the next 4H meeting.” He was stunned. Deeply quiet.

Watching him, hearing the news, an unexpected joy released in me. (Where did that come from?) I was delighted! Happy too. Jordan would have his oxen! Kyra and Jessica were leaping and cavorting, happy for their brother, happy for themselves. They set about making yokes for some toy bulls we have in our plastic animal collection.

Two more big bovines?! I rationalize my excitement. First of all, Jordan would be taking care of them. Not me. Besides, they're easier to keep than cows—they don’t need to be milked. They can live in the barn with our other cattle. All we need to do is enlarge our fenced pasture, as we have wanted to do since we moved here. Our hill is in need of grazers. And if Jordan really can get his team working, think of what he could do! Logs from the forest. Furrows in the ground. This might just work.

Besides, he will be in good company. People all around the world still use oxen to farm, especially in areas where the terrain is too hilly for tractors, or the fuel and service sources too rare. Oxen are hearty, disease resistant, and carry their own coats. Throughout time, they have served as symbols of virility and fertility.

On the other hand, it seems crazy. With Precious, our Jersey heifer, due to give birth in March, we stand to double our herd in a few months—from three to six. At least. Where does this end? Should I worry?

I decide not to. For one thing has always been true: our kids enable us. Geoff and I moved here in pursuit of our dreams, but the kids pushed us every step of the way in pursuit of their dreams. We wanted a rural place to think and create; they wanted animals. And now, pursuing their dreams, they are helping us in ours. I know it.

Geoff and I were the ones talking about living a closer connection to the natural world. Jordan is doing it.
Posted by Kimerer L. LaMothe, Ph.D. at 9:00 AM 1 comment:

Cream of the Crop

In our eight months of milking, we have worked out our own pail-to-pot-to-bottle system. Jordan carries the warm foamy milk from the barn in a stainless steel pail. We take the pail and strain it into a pot that sits in the refrigerator until the next milking. At that point, we pour the milk from the pot into half gallon glass bottles that we purchased over the web from an Amish family, thereby making way for the next batch. Why this three-stage process? 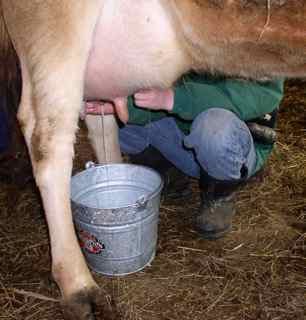 It’s all about the cream.

Milk from a living cow is itself alive. It keeps evolving, changing, separating from itself, unless it is cooked to kill (about 180 degrees) or shaken so furiously that it refuses to separate. Left on its own, what separates are the elements of various densities, with the fluffy fat molecules floating to the surface, while the heavier water, protein, lactose, and minerals settle below. The cream rises to the top. (Yes, skim milk is heavier than cream!)

While there are cream separators you can buy with asundry washable (i.e., needing to be washed) parts, we prefer to rely on the tried and true method of gravity. Sitting in that pot between milkings, the milk has a chance to do its thing. It is our daily non-activity. We let the cream rise, until a half-inch layer of skin coats the surface of the milk, awaiting the swirling, skimming movement of a large spoon. We sort the cream into a quart jar, before pouring the rest into bottles to drink.

Why catch the cream? It’s where the value lies. The cream makes butter, ice cream, rich cheeses, and (surprise) cream of the whipped, sour, heavy and light varieties. We are still amazed by the stuff. “Look at this!! It’s massive! It’s gorgeous!”

Still, we have learned a thing or two. In the beginning, we were obsessed with the idea that more cream is better. Tastier. It is hard to imagine otherwise, given how our culture romanticizes creaminess, the cream on top, the cream of the crop.

Yet the skin we peel from the top of our pot is more like sludge than liquid. It folds and holds its shape, sticking to the spoon, dropping in globs, heavier than the heaviest cream from the carton… and deceptively light. It makes ice cream that is too foamy; coffee that is too thick, and butter that takes way too long to churn. More cream is not better. What the cream needs, we have learned is its milk—to weigh it down, spread out its flavor, and deliver its charms.

Twelve hours is just enough. Separation is partial. The milk we bottle is not fully stripped of skin, and we skim enough milk with the cream to make it flow.
* 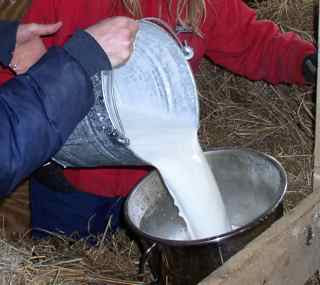 In American culture, we assume that the cream can and does and should rise to the top. The irony is that we don’t let it happen. We spin the cream away as soon as we can, forcing a complete separation of milk elements. We heat them to exterminate all bacteria, bad or good, mix and match for desired products, and the shake them into bits so small that any difference is homogenized. Many elements. One substance.

We put our milk through these paces ostensibly for our own health. Our milk will stay fresh, be user friendly, and not carry unwanted germs into our homes. Is it so?

The practices began with the advent of a dairy industry—and its excesses. With the increase of urban life, thrifty entrepreneurs carted milk in from rural areas and supplemented it with “swill milk” from confined cows eating the waste from urban distilleries. The "milk" makers added plaster paris, molasses, and other thickeners to give their product a golden glow. The waves of milk-borne illness caused by these practices were not due to milk—but to the humans milking it for profits.

So to protect the many from the excesses of the few, laws requiring pasteurization followed, along with practices of homogenization that prevented the killed bacteria from collecting at the bottom of your glass. It was a regulatory response that, in the end, favored the dairy industry by knocking out competition from any milk whose cream really would rise to the top. In some states, including ours, selling raw milk is illegal. Large dairy operations are the laws' key defenders.

We didn’t realize that by owning our own cow, we would be engaging in an emergent resistance movement to the hegemony of the dairy business over our daily foods! Dear Daisy, our calm, cud-chewing compatriot, is producing contraband.

And we drink it up, gladly, gratefully, after letting the cream rise. It is a slow process, and one we never complete. For what results is always best when mixed in various proportions with the milk it leaves below. The slight separation opens up all kinds of creative possibilities. We add more cream for butter, less for ice cream, less for cheese, and less again for milk, marveling at the combinations and permutations. No wonder the industry wants to corner the market--and our culinary imagination. They don’t want our cream to rise.

This blog explores the range and reach of the philosophy of bodily becoming introduced in my book, What a Body Knows: Finding Wisdom in Desire. Food. Sex. Spirit. Movement. Dance. Desire. Freedom. Family. Farming. Creativity & Love. It's all here.

"What a Body Knows"

Kimerer L. LaMothe, Ph.D.
I am a philosopher and dancer, living with my partner, Geoffrey Gee, and our five children on our Farm for Arts and Ideas in upstate New York.

For more from Vital Arts, please visit our website: